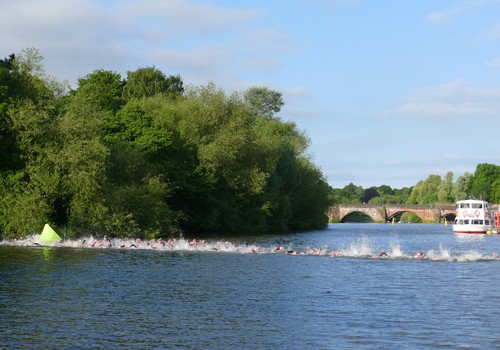 Meanwhile, Alex has been murdering triathlons.

Approaching mid June without a proper open water triathlon under my belt, meant I was really looking forward to Deva.  I had fond memories of my previous race there in 2013. It was the year the World Champs were in London and a strong field had turned out, tempted by the chance to win some prize money – a rarity in Age Group races. I finished 4th Overall, my first decent result in a relatively big race. I was as happy as I was surprised, it’s not often you get those feelings as your expectations change.

Come race day, all was looking good and in what’s been a pretty lousy Summer so far, the sun was even out. With some good competition spread across the different Age Groups, the main focus was to be the first one home in the 17-29yrs category – which would then also hopefully have put me in a strong position in the Overall standings.

I was in the 1st wave of the day, in the water at 07:15 along with 130+ others aged 17-29. The best thing about the swim was avoiding a good heel in the face, as it was all pretty feisty in there for the first few minutes. I was just off the back of a group of 5/6, but didn’t feel like I was moving well and had little idea about where I was in the grand scheme of things.

I passed a lot of people in the first 5k of the bike and after I shouted to a marshal, I learned that there were only 2 people ahead with a 1 minute gap. One of the people I’d passed had stayed with me, before another rider came past with about 15k to go. With 10k to go either they got faster or I slowed down, as I lost contact for a while, before gaining ground towards the finish. By the end of the bike, I’d passed one of the 2 people who were further ahead and think I headed out onto the run in 3rd place.

Not long in, I moved into second, but 1st place looked a long way ahead. The lapped course meant I clocked the gap at about 50s towards the end of the first lap, and when you think about how far you could run in 50s it’s a sizeable gap.

As earlier competitors filtered onto the lapped course, it was harder to gauge the distance, which is when having some family or friends spectating proves well worthwhile.

Towards the end of lap 2 I thought I might be about to move into 1st, confirmed by the expletive, I thought I heard them mutter as I went passed.

The favourable conditions on the day also meant that for a short time I was the proud owner of a new course record and holding top spot at the National Champs. I even had the pleasure of being interviewed straight after (the race is on TV sometime in July), but don’t expect I’ll be looking my best for my 15 minutes of fame.

I knew there’d be some tough competition from the later waves and unfortunately I got bumped down into 2nd place Overall, but maintained 1st in the 15-29AG. 1st in the AG and podium Overall was a benchmark, so a satisfying result overall

A special mention should be given to Chester Tri club and all the marshals on the day. Deva is a big race, but still retains a great local feel and atmosphere, something some of the more ‘corporate’ events don’t have. For them it was particularly significant, as a tragic road accident (whilst cycling), had seen them lose club member Alan Cronin. Whilst I never knew him, the emotional speech from Andy Hamilton, clearly showed he was a much respected club member and family man.

Another PB for our @transition_cc coached rider @j

@lee_eaton_14 racing at last weekends round of the

Final league tables are out for the @north_west_cy

Great result for Karen at the weekend’s @gorrick

Well done to @gf_girlonabike Karen Price for a bri

The final round (5) of the @north_west_cyclocross

#tbt Glentress weekend away for some of our NW Cha