Battle on the Beach

Team JMC riders Dave Powell, Phil Simcock and Jason Miles all took part (along with almost 600 other people) in the Battle on the Beach race in South Wales last weekend. Dave got a puncture, Jason rode a fatbike and Phil describes his race here…. 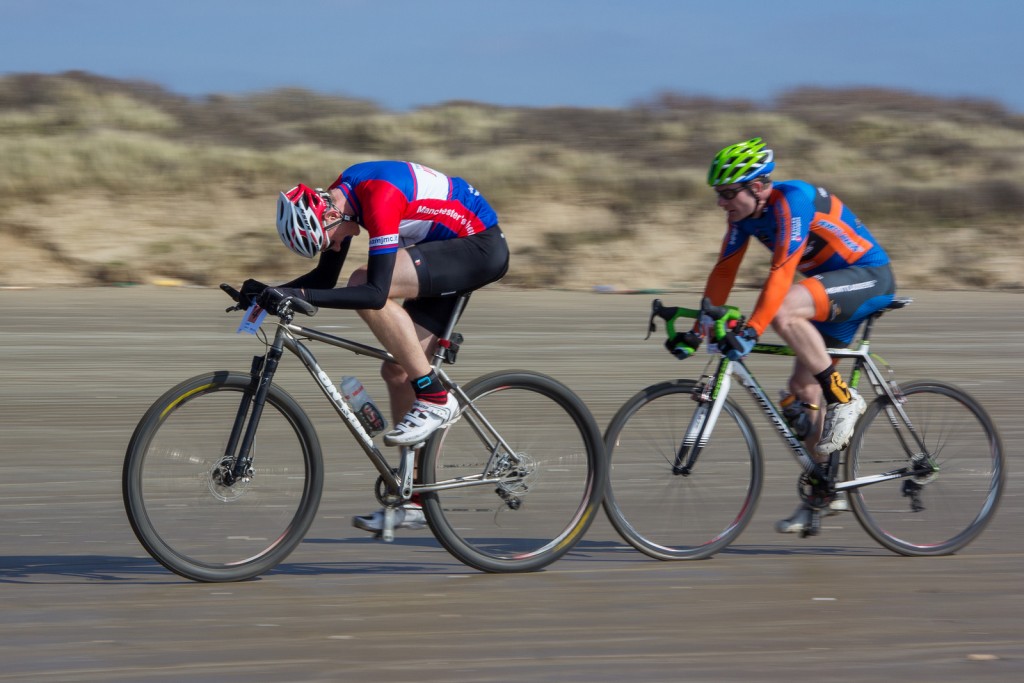 A sunny day out at the beach with some high stress, full octane bike racing – what’s not to like?

I’d missed last year’s inaugural Battle on the Beach bike race and heard nothing but good things about the event, so this year I was determined not to miss out. A mixture of pan flat racing along the hard packed sand and twisty, dry sandy singletrack in the adjacent woods was a race format I wasn’t used to, but sounded like great fun.

A pre race reccie along the beach confirmed it would be fast along the sand with lighter winds that expected. I’m not the best at riding hard on the flat, so this was going to hurt, wind or no wind!

The start was going to be interesting. Near six hundred people on the start line, all who needed to negotiate a section of soft sand before we hit the more rideable hard packed sand. Do you run or try and ride? The starting pistol fired and chaos ensued! I knew I had to get in the lead bunch at the start or I would get left behind in their wake. I started to run and stumble, people were falling over all around me, some trying to ride, some running. I mounted my bike and slipped on the pedals in my haste. As I started to speed up I could see a lead group forming ahead of me by about 30 metres already. I knew I would struggle to latch on. I pushed as hard as I could and I was gaining on them. Down to 20 metres, surely they’ll slow up a little soon. Head down, push harder. This was now starting to hurt and my heart rate I’m sure was higher than it had been in a long time. The gap now closed to near ten metres and then I blew. I couldn’t keep up the pace and the group started to pull away. Noooo!

I had pushed too hard and was now going to pay. Another group then caught me and passed me and I hadn’t recovered sufficiently to stay with them. I felt like I was pedalling backwards! More lone riders passed me then another small group came up alongside. I wasn’t going to let this one go. I pushed hard trying not to pass out and managed to manoeuvre myself into the middle of the pack. As if by magic the pedalling became easier and I could start to recover. Not the start I wanted so now I needed to think of Plan B.

This consisted of recovering until we turned off the beach and then smash it and try and move up the field. I was too impatient and after a short time moved to the head of the bunch and pushed hard. My legs had recovered a little and I could manage the pace. We turned off the beach and I kept the pace high along the wide track. No one wanted to help drive the pace, so I cracked on. As soon as we hit the singletrack, the bunch broke up and I started to catch and pass a number of riders. This continued until the end of the lap at which time I realised I was alone again at the start of the next beach section. This was bad planning. I saw a couple of riders ahead on the beach and pushed hard to catch them. This time I managed to reach them without blowing up.

As a small group we passed a number of lone riders on the beach and swept them up. There was a bigger group not far ahead, which I assumed were the second lead group. Once we made it to the singletrack for the second time, my goal was to catch the group before we hit the beach again. I managed to catch them as we passed through the start and we all headed towards the beach together. The pace was high heading towards the soft sand, so I knew everyone was going to try and ride through it rather than dismounting and running. We hit the sand at about twenty miles an hour and a rider directly in front of me lost control and performed an amazing somersault, which was nearly as good as the somersault I performed after I rode into him lying in the sand.

This meant that the group had now splintered and I was on my own again for the start of the beach section. I knew that all my hard work would be lost if I rode this section alone, so again I spotted a lone rider ahead and pushed as hard as I could. I latched on but the pace was too slow, so I took a breath and moved on to the next couple of riders. I was surprised that I still had the strength and it showed me that the endurance training I had done over the winter was working.

I made it off the beach having passed a number of other riders and then pushed on through the singletrack as hard as I could. No point in leaving anything in the tank. The race was taking its toll on a number of riders and I was surprised how many I caught and passed on the last lap. It was all going well until I tried to overtake a rider on a bend and ended up with brambles wrapped around my cassette. Stupidly I rode on knowing the finish line was only a few hundred metres away, hoping the brambles would clear. It didn’t happen and I dropped my chain. Stressfully trying to sort it and therefore taking twice as long as required, previously overtaken riders were now taking back their place – very frustrating!

Once cleared I rode the last section to the finish, with a placing of 55th overall and 16th in cat.

Not my usual race format, but that’s what made it so enjoyable and that’s why this race is quickly becoming (or already has become) one of the first races people put on their ‘to do’ list at the start of the season. Apart from an appalling start and near ‘bonk’ in the first five minutes, I enjoyed every minute. From the hard pack sand pelotons to the twisty dry single track, it was a joy to race. Didn’t place as high as I would have liked, but I’ll be back next year to put that right.

Congratulations to Matt Page and his team for organising a unique and amazing event. I didn’t hear any negative words about the race and organisation and expect this will now become a ‘must do’ event for all racers and riders alike. Roll on next year….