In what has now become a regular feature of the Team JMC annual racing calendar, Andrew Burgess this time raced at the Strathpuffer 24 hour mountain bike race in the pairs category alongside 2012 solo winner, Phil Simcock.

After soloing Strathpuffer for the last couple of years, I was all set to give it a miss this year and join the masses at home pressing refresh on their laptops to track lap times, whilst drinking a toast to the madness of those many miles north enduring the toughest of conditions.  However all that changed when Phil (last years’ solo winner) said how about pairing up.  In a fraction of a second I had forgotten all my reservations and the Puffer was back on.  On reflection I would have hated being at home scrabbling around for snippets of news whilst team-mates were up to all sorts of awesomeness.

Having raced with Phil back in 2010 and finished 4th in the pairs – I also hoped that I could stand on the shoulders of a giant and cross off another item on my bucket list and podium at the Puffer.  First though I had to cram in some training in my usual “ride lots with no structure” approach.  Training went well apart from being knocked sideways by a bug at the start of January – many miles were ridden and a couple of weeks before the event I even got to practice on ice tyres when the Manchester winter weather turned up.

The bike choice was proving to be a challenge – 29er Scandal (rapid big-wheeled loveliness) or Scott Spark (retro wheels but as plush as a very plush thing).  The final decider was the £150 quote for 29er Ice Spiker Pro tyres!  So the Scott it was along with my existing bulletproof one kilo each Ice Spikers.  In the end the plushness was a real bonus on a pretty rocky course.

Getting there was OK apart from some sketchy snowy conditions up and over the A9.  The disappointment started on the descent to Inverness when the snow disappeared and it rained and rained heavily.  Gutted the snow wasn’t as bad as everyone was “enjoying” back at home.

On the day of the race the conditions were cold and miserable and the track was covered with generous quantities of ice even on the lower sections.  Tyre choice made then.  Ice tyres for the first lap and, due to me forgetting to pack my brave pants, they stayed on for the full race.

Phil started the race for us and put in an absolute blinder.  I was waiting outside our gazebo peering into the sun and could make out an outline of a rider, as he got closer I could see some red and blue and then I heard “BUDGE!”  Bugger me Phil was leading the whole race.  And so for about a kilometre did I.  And then the fast lads caught me and I felt like I was standing still despite the fact my lap time was only about 5 mins down on the best.  Finishing my first lap I felt trashed – mentally I really struggled with the thought that I was letting Phil down. I wasn’t (as Phil emphasised) but it is hard not to feel like that when you are racing with a proper fast lad.

Before we started we knew Phil would be faster than me so we agreed a strategy that would see us both ride around 12 hours (ultimately this meant 14 laps for me and 18 for Phil).  So initially we rode 4 laps each then Phil did a double.  After this we did 3 laps each before Phil did a double and this routine was pretty much repeated to the end of the race. 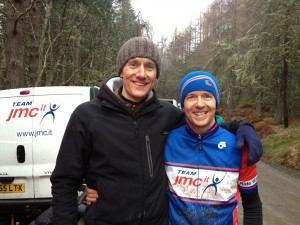 My memories of the rest of the race are a little blurred.  I remember struggling at the start before downing a couple of caffeine gels and this perked me up (and speeded me up) a lot.  I remember struggling to stay warm when not racing, being in awe of the effort the solo guys (Jason and Dave) were putting in, being so grateful for the efforts of our pitcrew (Debbie, Angela and Wayne) for whom nothing was too much trouble, having a couple of big moments (one that I think was caught on camera) but not crashing once, being terrified every time I hit an icy section at speed (Ice Spikers are amazing if you learn to trust them), not wanting to eat or drink anything but being told in no uncertain terms to get on with it, being inspired by the uplifting messages from everyone back at home and I also remember sneaking up into 3rd place sometime after 12 hours and thinking there was no way were we going to let it slip from our grasp.

A 5 second lead over the 4th place team kept creeping up until a long lap time from the 4th placed team (due to a snapped chain we subsequently found out) gave us a comfortable cushion.  1st and 2nd were never that far ahead of us, but with my pace they were always just out of reach.  As the sun finally rose at 8.30am (with 90 mins to go) we were a lap and about 10 mins clear of 4th.  A lap more each and we had secured a podium finish. 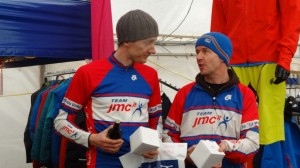 My highlights were the amazing performances from Jase and Dave, racing with a top bloke as a teammate, riding a great course that offers every challenge you could want, the top support from our amazing pitcrew and ultimately crossing an item off my bucket list and collecting one of the famed Strathpuffer costs-nothing-but-means-everything snow globes. 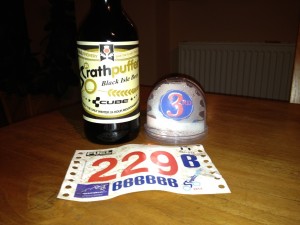 Will I do the race again?  Don’t feel like it now but I felt that way last year.  Let’s see how I feel when we have watched the coverage of the race on BBC Scotland’s “The Adventure Show”.