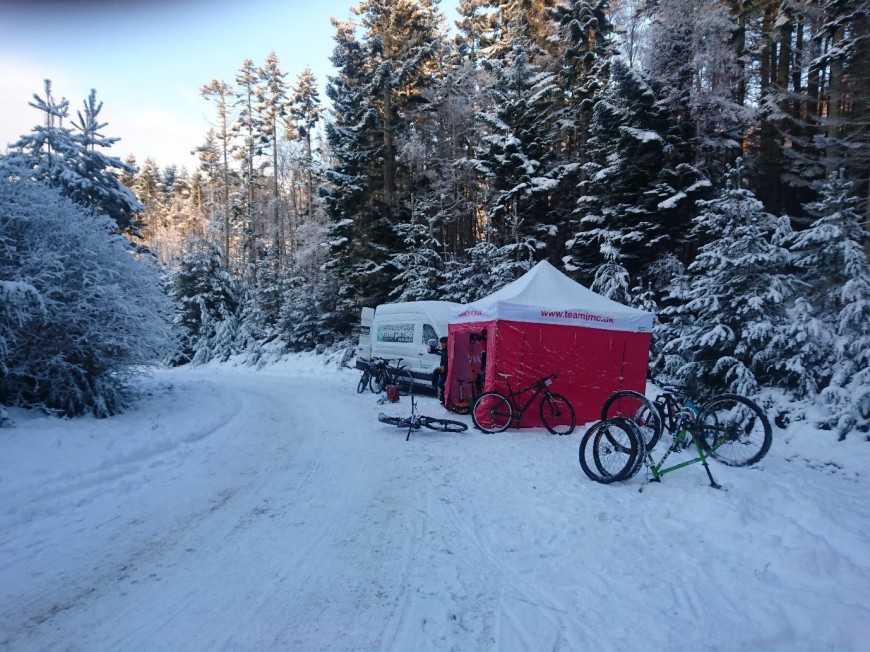 “How do people live in Alaska?”
“How do people put up with this every day?”
“Why is my brew stuck to the ground?”
“Jesus Christ, why does the heater not work?”

These were just some of the hundreds of inane questions we were all asking each other over the course of last weekend, sat in our dark, squalid, filthy gazebo while we each waited our turn to ride another snow and ice-covered Strathpuffer lap.

The Team JMC gazebo isn’t normally a disgusting hovel, combining the worst of the Glastonbury Festival, an explosion in a breakfast cereal cupboard and the Calais Jungle – it was just that this time it was inhabited by 4 blokes who were all racing and not one of us had brought our Mum. 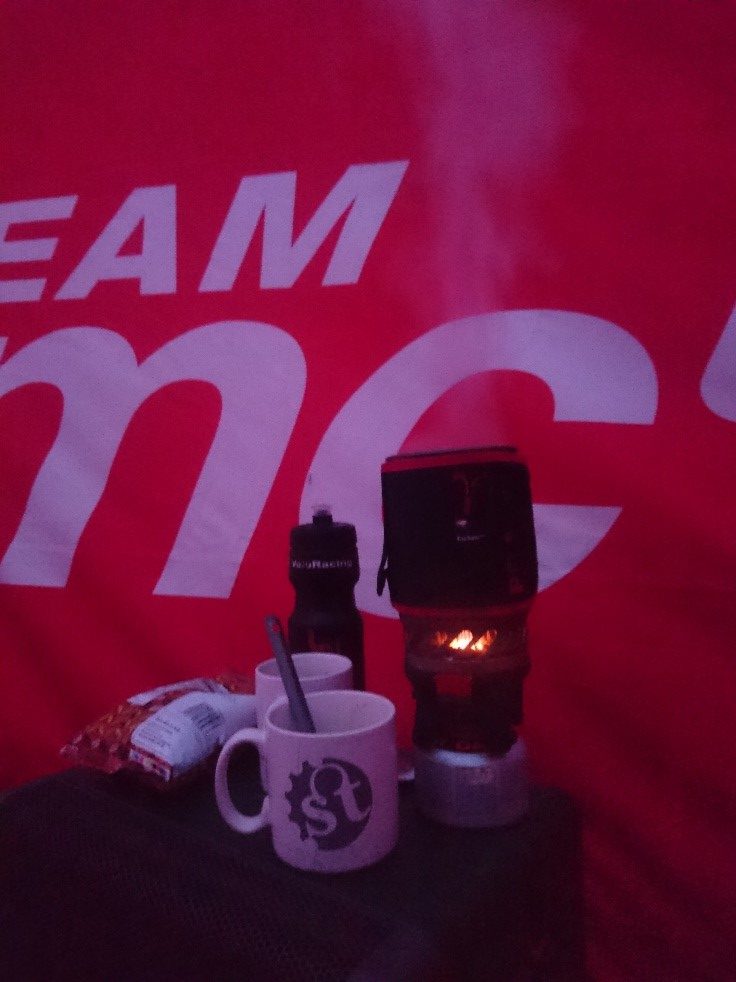 It really was very cold indeed. I had to retreat to my car at one point and left Darren (my pairs team-mate) to ride 2 laps. I don’t think he minded. Riding your bike was the only way to stay warm. The car seemed like it was bloody miles away – in reality it was in a hotel car park in downtown Contin. If you’ve ever been to Contin in the Highlands you’ll know that heading ‘downtown’ takes seconds from whichever part of Contin you’re currently at.

Heated seats on full blast. Heater on full blast. I was shivering uncontrollably while the damn car took 45 minutes to get warm. The car’s external thermometer reckoned it was -7.5 degrees centrigrade. It felt far colder. It’s a 16 year old car so the instruments probably start to go mental when they get really cold anyway.

The weather lady on the BBC last night said that Saturday night was minus 13 in the Highlands so I’m claiming that. Minus bloody thirteen.

At least the mysterious Tesco bag of poo that Carl discovered under the van was ‘manageable’ in the cold temperature. Why use the massive forest we were in the middle of when you have a carrier bag? Five pence well spent.

Back to the exciting racing we were doing. Tom and Carl were bashing out laps and were flying. They’d been training and it was paying off. 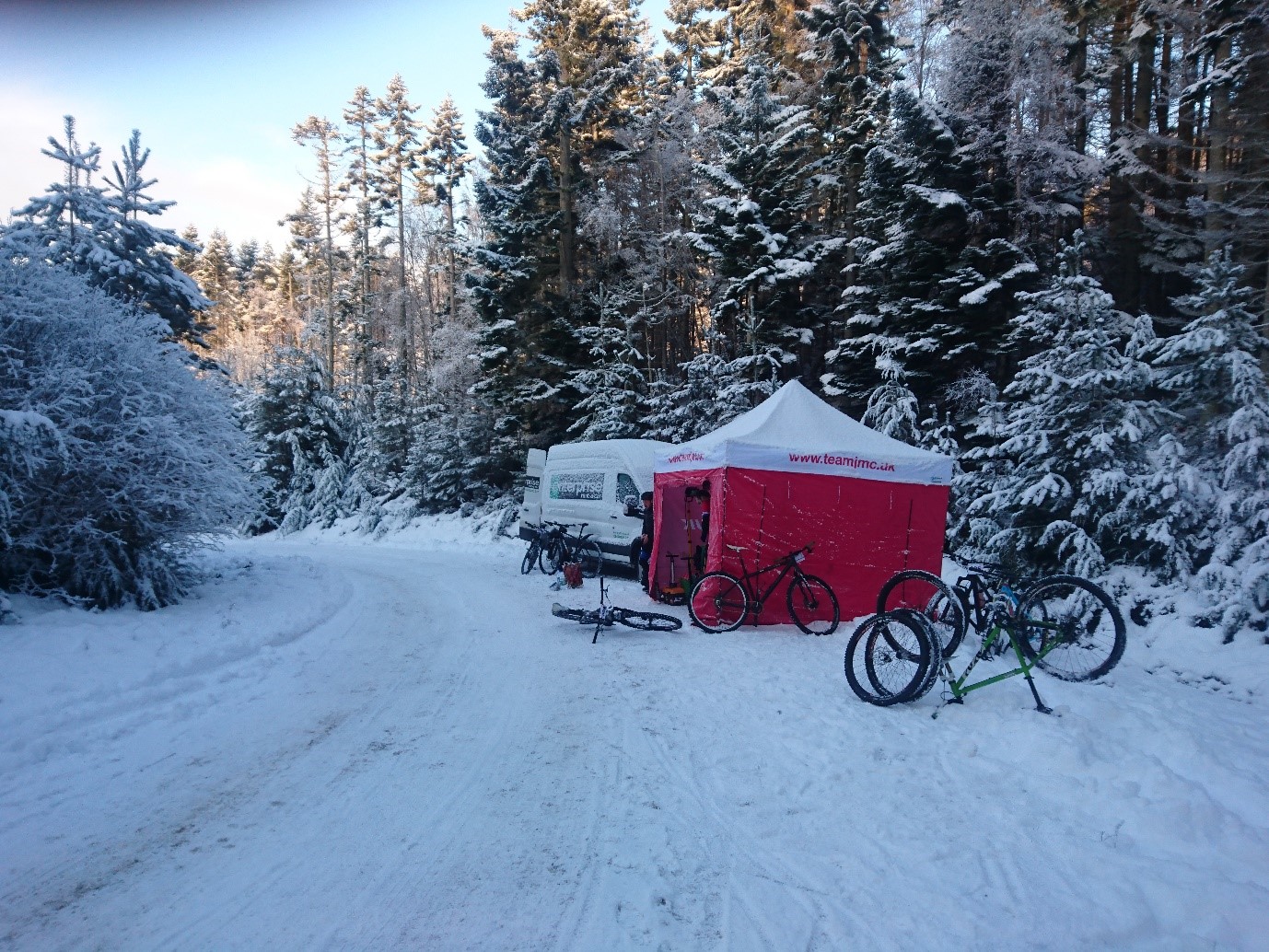 Darren and I were also doing OK, in our own way. We weren’t messing about (OK we started to mess about quite a bit once we realised we’d dropped out of the prestigious top 25 places and our motivation to keep changeovers below 10 minutes diminished) and we were getting round steadily. 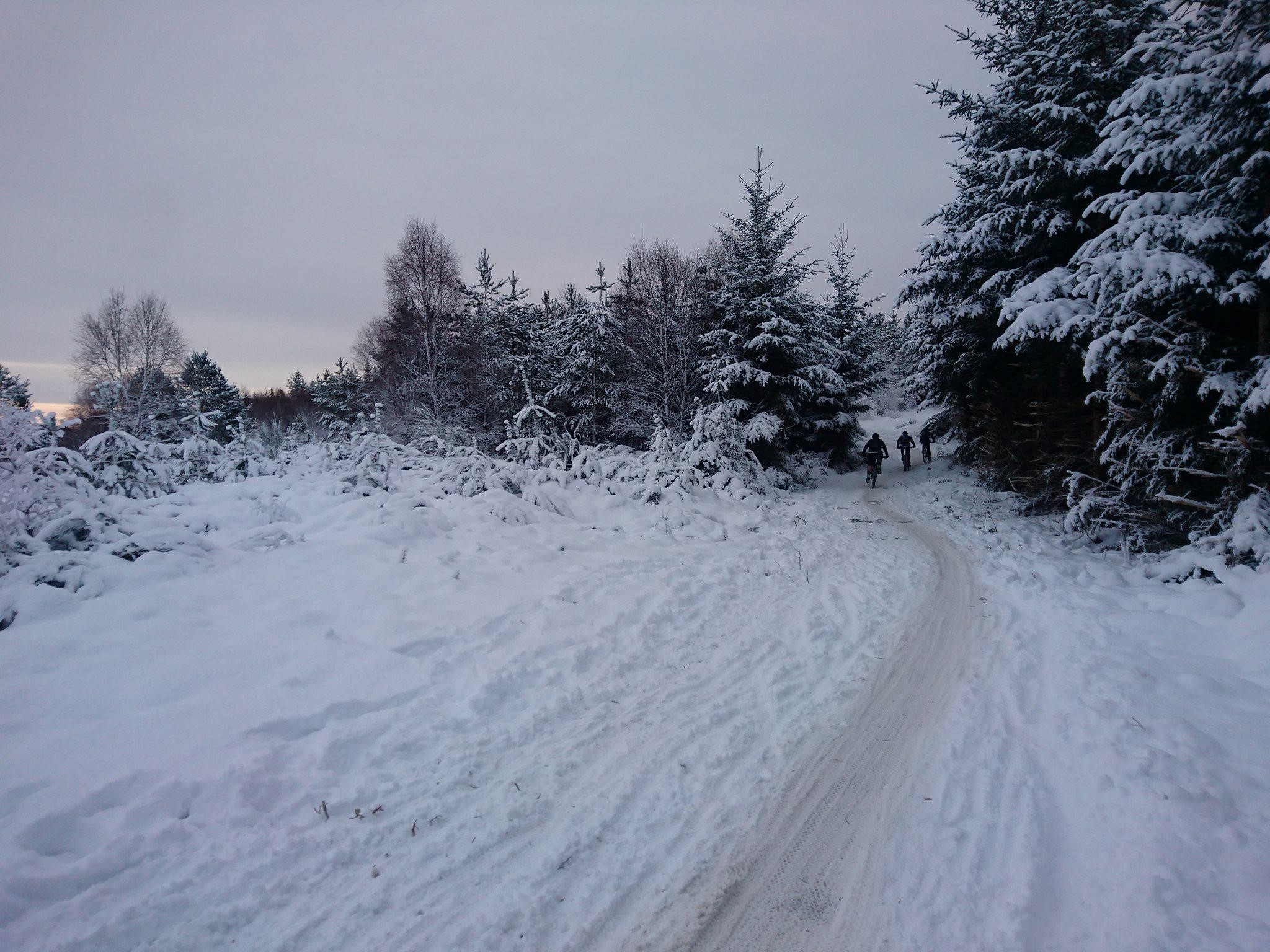 Not much choice really – the generous covering of snow on the course meant that momentum, a vital ingredient of Awesome Singlespeeding, was hard to achieve and even harder to maintain. On the uphill bits, any hint of pedaling out of the saddle resulted in a large amount of rear wheel slippage, so pushing the damn thing up even the smallest of inclines was necessary to avoid a stem/ballsack interface-event. 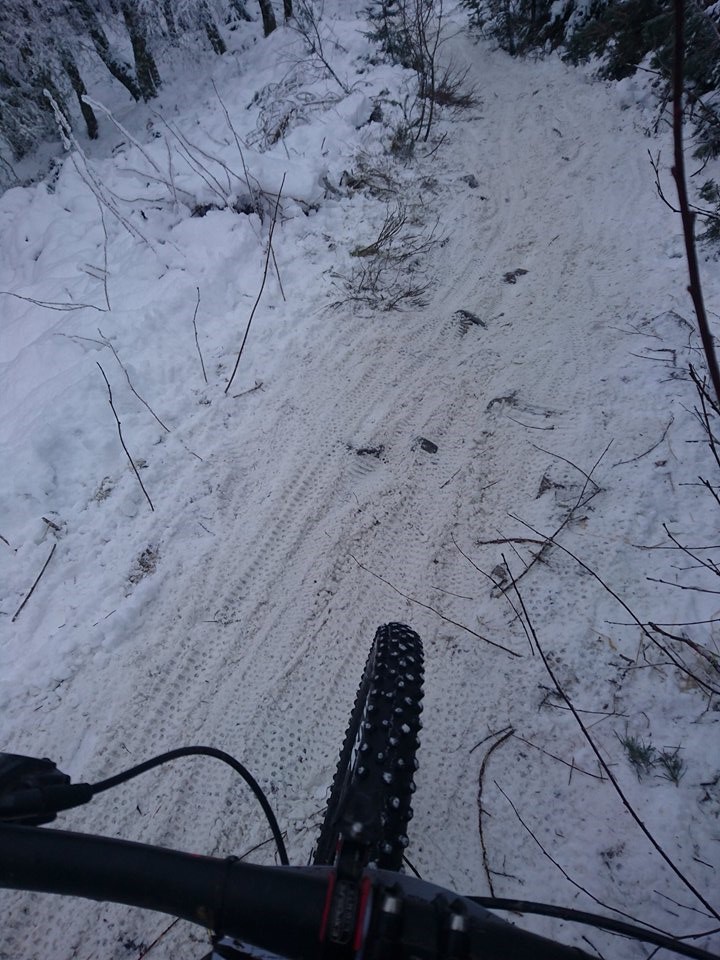 Alternating between pushing uphill and trying to pedal uphill at a cadence of 10rpm only gave us a sore back each, which to be fair we both turned up at the race with anyway. But we weren’t going to be singlespeeding our way to a bad back cure.

In essence, we got slower and slower as the race progressed.

It didn’t really matter – neither of us had any burning podium ambitions or expectations and while it was very cold (I might have already mentioned this), this was probably the most perfect Strathpuffer conditions ever. The lack of mud, rain and the fact that the whole thing LOOKED AMAZING more than made up for any suffering on offer. 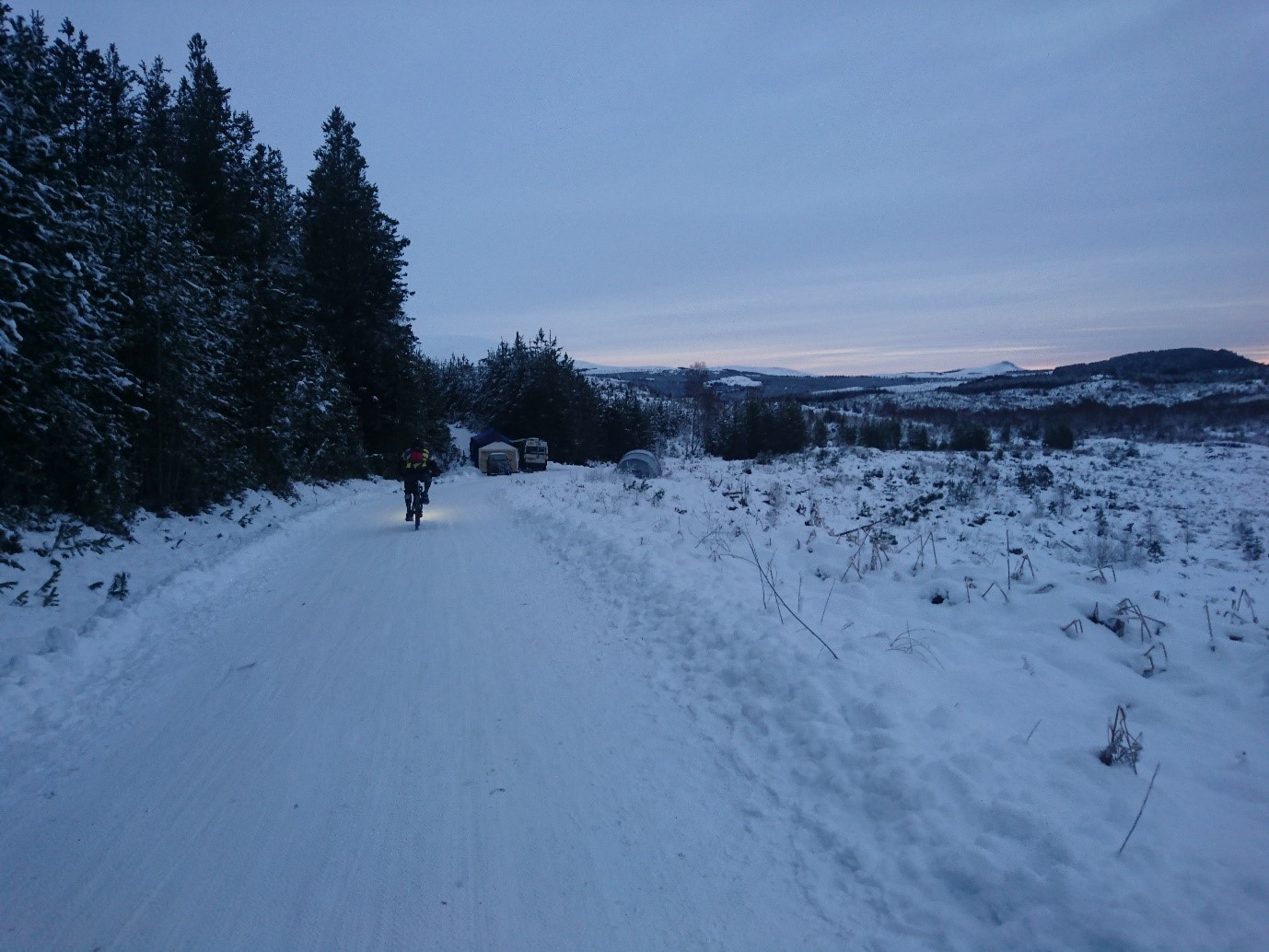 Our fast pair (and by far the pair responsible for most of the shambles in the gazebo – I’m just putting that out there) of Carl and Tom finished in 5th place in the pairs after some late neck-and-neck racing drama where some other chancers pipped them to 4th place. Me and Daz, after reaching the heady heights of 10th earlier in the race, somehow managed to finish in a less-than-awesome 34th place in the pairs. We only had 2 gears between us though, we Kept It Real therefore technically, WE WON.