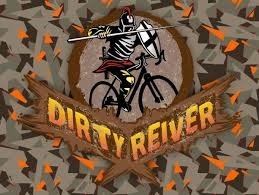 Big Day Out for Richie Scott at the Dirty Reiver

“Reive” is an early English word for “to rob”, from the Northumbrian and Scots verb reifen from the old English rēafian, and thus related to the archaic standard English verb reave (“to plunder”, “to rob”), and to the modern English word “ruffian”.

Well plunder it did. Left knee to be exact but I will get to that!

It was a fairly early rise and a short drive that delivered me across the border and Kielder Castle for my first raid at the Dirty Reiver.  I do not process a gravel bike or anything that resembles one. So I was limited to my only weapon of choice and that was my Cube C62 hardtail. I found a set of slightly worn Racing Ralphs that I thought would help rather than my Nobby Nics, a back pack that I filled with bricks and mortar and some food that I had wisely put in places that I could not get to. Upstairs for dancing, downstairs for thinking that’s me!

So in the crisp, cold morning air I commenced my Dirty Reiver onslaught and trundled out with a small raiding party to plunder Kielder of its fire roads, hills, mileage and toughness. A wave of apprehension and dread slowly put its hands around my neck and squeezed. The first 30 miles I had worked out that I could have done with more gearing for the downhills and flattish segments of this loop as some riders sailed past with gears to spare. This I may add is not just the bikes but also the riders who looked devilishly fast and confident in tearing about these bumpy fire roads and double track with ease.

As the day wore on and the warmth of a cold sun sometimes bathed my old, sagging back I was discovering my first major mistake. The backpack. For the first 100km I was slightly oblivious to it but as I made my way up the cross border slog that takes you back into England my back and hamstrings could feel the strain. This was starting to be the albatross around my neck. As I came to the 200km/130km split I thought about ditching the backpack as I was struggling to switch off the pain it was giving me.

With no let up I decided to just plough on and hope the pain becomes a normal feeling that I can live with. The Kielder fire road system just morphs into one big explosion of views that are very similar and disorienting. I should know as I do a lot of cycling in them. This can play with the mind and my low point came as I was looking over my shoulder whilst climbing a slow and sapping fire road climb. I was looking at a view that on another day would have been amazing but I just puffed and told myself that I have seen that or similar views all day and now I am bored of looking at the same wooded vistas. This decompression of cycling want paired with my aching back and hamstrings played with my head big time. But this is why I do these endurance races. It’s the low points that trigger my determination, they push me to look behind my mirror and grit my teeth. For me it’s about completion of the race. To finish what I have started. I am learning that everyone hurts it’s just how I handle my mental pain that outlines what my outcome will be.

So as I rounded the castle 150km in I notice that I cycled by my car. Brakes on, backpack off, bits and bobs stuffed into my pockets and I was back on it. The relief was unbridled as the pain in my hamstrings lifted and the back pain eased off to a point that I was happy to carry around an aching feeling that was bearable. After the last food stop I started to struggle with my left knee. Hell’s teeth!!! I was beginning to enjoy this again. As I hurtled down to the lake and tried to ride the last 30km at full gas (or as close as I could) my left knee had basically downed tools and was replaced by an aching, stabbing pain that hampered every climb. Small or big I had to just spin up them using my right leg more than the left. Only the final road section gave me a slight relief as I got into a rhythm and again I could just ignore the dull, throbbing pain.

As I counted down the miles the knee pain delivered (on time) a fantastic dose of stabbing hurt that when I turned into the castle nearly had me pushing up that final small road hill. But with loads of folk still hanging around and clapping you in that was not going to happen. As I crossed the line Team JMC’s very own endurance king Phil Simcock was there to high-five me and cheer me in.

I got around the Dirty Reiver in 9hrs and 45 minutes gaining my Outlaw privileges and silver badge. I would recommend it to anyone who loves to push themselves physically and mentally. The 130km or 200km both give you a return in pain, accomplishment and soreness. Just prepare yourself for a view of a million trees. You could be that one match!

I learnt a lot of lessons out there. I usually do but I know now that a back pack is not for me. A bag on the front of the bike for easy access to my food would help and a bike bag for all my other junk is my way forward. Horses for course and all that jazz.