Those are people who are obviously lacking in moral fibre. Taking a bike that’s been checked, double-checked, ridden, checked and ridden again? Give over. Just sign for it, whip it out of the box and ride the bugger.

You would though, wouldn’t you? Look at it! 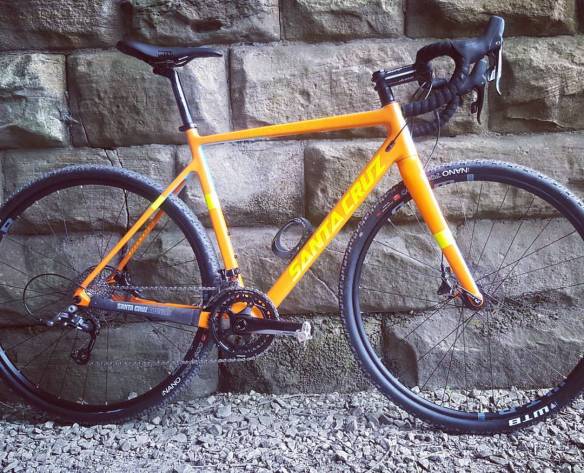 I spent a couple of hours on Friday night swapping the tyres on my new Santa Cruz Stigmata for some wider, more-gravelly ones as well as adding a couple of bottle cages, some pedals and adjusting the seatpost so that it fit me. Sort of. It was a bit of a rush job and the front brake was rubbing a bit (brand new pads and I put the mechanic at Jungle under a bit of pressure when I asked for the bike at the last minute) but time was getting on and I had to drive 150 miles north to Kielder to take part in the Dirty Reiver 200 at 7am the morning after.

I slept in the Mighty Passat that night, the Stigmata (worth approximately 12 times more than the car) at the other side of the bed. At 5am I got up again, built the bike, drank a nice coffee that Dave had made in his motorhome and headed to the start.

200 kilometres of gravel on an amazing bike, in nice weather, in a stunning part of the country, with a large portion of all the coolest people I’ve ever met since I started racing about 100 years ago? These are weekends made in heaven.

And it was bloody brilliant. Miles and miles (I’ve done the kilometres thing now, thank you) of dirt roads, massive views, blue skies and friendly (if a bit breathless) chatting with friends old and new.

I never did stop that front brake rubbing though, and the tyres that I fitted the night before were just being a pair of rebellious idiots all day long. By the time I’d arrived at the bit where the course split – where the madras/korma – blue pill/red pill – long and short options were (there was a 130 kilometre route as well as the 200), I’d re-inflated my front tyre 5 times and the rubbing front brake was really starting to make its rubbing-yness felt in my legs so I decided to take the blue pill and bail out on the shorter option. I decided that I could still go for another ride the day after rather than spending the next week recovering and at this rate I was going to finish the long route on Wednesday.