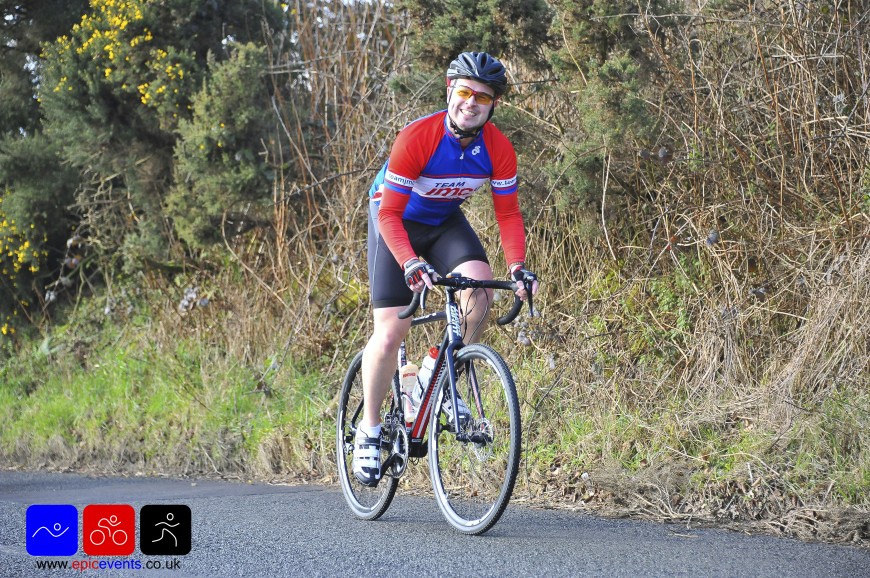 They say you can’t beat a dog in its own back yard. In this case, it appears quite a few can. The Parbold Duathlon is one of the oldest organised events in the country. It’s situated in the rolling (very flipping rolling!) hills of West Lancashire, a stone’s throw from my house. I tried to get in last year, but the field fills within hours of opening and is limited to 150 competitors.

The event consisted of a 5k run followed by 27k on the bike then a final 5k run. In old money, it’s roughly a 3 mile run, 17 on the bike then another 3 running. It’s described as ‘undulating’ in all the descriptions.

The field was limited to 150 competitors and mostly consisted of people I’d jealously describe as elite, iron robots, who would take everything and leave nothing. Competitors that make you think, “if only I’d started doing this at 15, I could be half as good as them.” There was more carbon fiber in the transition area than an F1 factory. Racks holding equipment that would not look out of place in the ISS. Then there was me. Fighting for the mortals with nothing but sheer determination and boatloads of amateur enthusiasm. With “nobblies” (as someone cried as I passed them. They aren’t, they’re just wide) on my rims and blissful ignorance in my head. However, like any good Bond villain, I had a secret weapon…… extensive course knowledge.

The start was based at the Farmer’s Arms pub in Mawdsley, with transition in the school playground next door. The run route was 2 laps of 2.5k loop. The loop was up Hunter’s Hill and back through the back roads (I use the terms roads very loosely. We’re talking narrow farmer tracks that haven’t seen tarmac since the 50s). The lap was highly “undulating” and competitors thinned out very quickly. T1 was entered and it was noted that there weren’t a lot of bikes left in the rack. Anyhow, quick (not very quick) swap of shoes and off out on the bike.

Now this is where it got interesting. The bike route takes you in at Parbold Village then spits you out at the base of “The Beast”. “The Beast” is what some term Parbold Hill. A massively cruel leviathan that drains and robs you of all dignity and strength. Officially, it is a Cat4 climb with a gradient of around 13%. Now, this is where experience takes over. I’ve been over this hill more time than I care to remember both running and on 2 wheels (it’s easier to run up it by the way). I know where to conserve, and where I can put my foot down. On the three laps of this circuit I had to negotiate this hill in triplicate, I found myself overtaking a number of people on the ascent much to the annoyance of the hairless, carbon folk. They would get their own back on the flats though unfortunately. On summiting the third time, I was greeted by my extended support crew which provided a much needed boost.

Once all my energy had been dispelled on the bike, it was into T2. A very labored change ensued and off out on the run. After starting off in the wrong direction, I was corrected by the screams of the crowd and got on my way up Hunter’s Hill. I managed to stay with the target mile times for this run, which was a pleasant surprise. I’m sure someone had put more hills into the 2nd run. 3 miles passed quite quickly, then over the line.

The whole event was incredibly well organised. Well marked out, well marshaled and a really good atmosphere. Although I was massively outclassed by most of the filed, only being 30 minutes off the winner, I’ll take that as a success. If anyone would like to grab one of the 150 please for next year, the website is http://www.epicevents.co.uk/duathlons/parbold-duathlon-march-2017.html. Entry usually opens at the end of August.

Like a murdering robot from the future, I’ll be back……