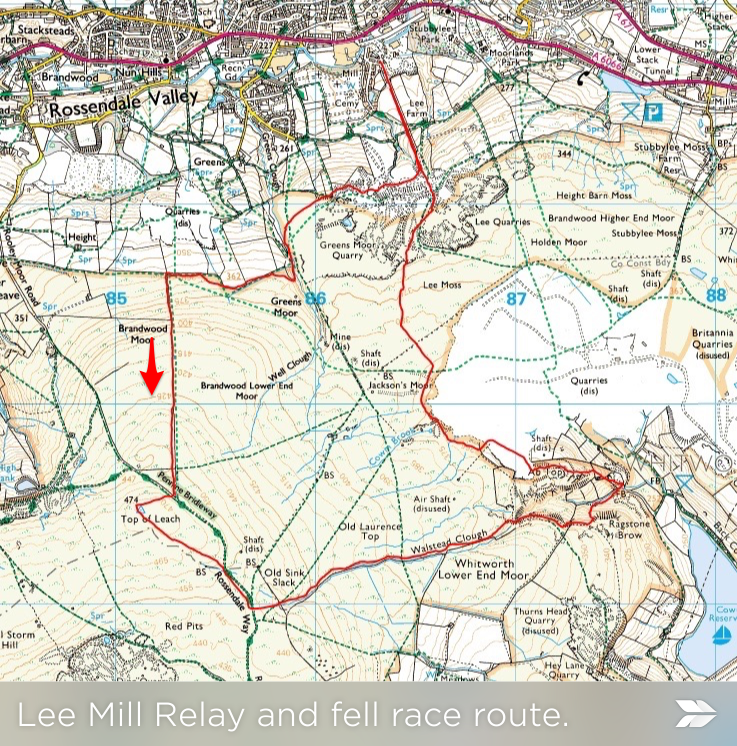 On Sunday 29th November we had two teams take on the challenging Lee Mills Relay – made even worse this year by the worst possible combination of very high winds, rain and hailstones.  Despite everything that was thrown at them all our runners finished with smiles on their faces.  Here are a few words from the brave souls who took part:

Andy Baron: I set off pretty well up the hill towards the quarry but struggled into the wind to the trig point then descended mostly on my back side. There was a serious amount of water on the course but I dealt with it pretty well. Overall a good fun well organised event and I’d love to try the course in different conditions. Budge: After being out injured for some time I was giddy about going racing again and the weather conditions on the day made the whole occasion epic.  I have never run (staggered more like) in a wind as strong as that before and the addition of the hailstone towards the end of my lap was a nice touch. Must have had at least a dozen falls including sliding about 30 feet down a grassy bank at one point.  Highlight was sinking into a waist deep mud pool.  Brilliantly organised event though with the hardiest marshals ever.  Recommended. Jacqui Simcock: As a first fell race the Lee Mill relay was brutal. Having neither the running fitness or training of running through deep mud/thigh high water/grassy hillocks I struggled the whole way up the top of the valley, battling the gale force winds and hail storms until I reached the top trig point. Turning around to head back down off the moor only meant gale force winds pushing me off any foot placement I managed and propelling me head first into mud and streams. At no point did I feel anything other than battered and was still in a daze at least half an hour after finishing. I am extremely proud I managed the hardest 6.2 mile run of my life, but would need to prepare a great deal better to attempt another one. Phil Simcock: Definitely up there as some of the worse conditions I have voluntarily found myself competing in, for fun! Horizontal rain, gale force winds, deep muddy bogs, river crossings and steep rocky scrambling – brilliant. Two sprained ankles, pulled calf muscle and full body ache – not so brilliant, but worth it….

Andy Williams: My first event for Team JMC on a so called fell ‘run’. With gail force winds, deep bogs, waist high water and climbs that steep you had to crawl up them I spent about the same time face down in the mud as I did on my feet, so I use the term ‘run’ very lightly!! Excellent organisation meant a smooth run with no direction mishaps and special mention should go to the hardy marshalls giving an encouraging word all the way around, particularly the poor chap at the ‘top of leach’ who literally had to peg himself down to avoid being taken away on the wind. The gale force winds were very tough on the first major climb almost bringing me to a standstill on a number of occasions, however it was the downhills where most trouble ensued. I blame inadequate footwear for my ‘Bambi on Ice’ impression but falls occurred at regular intervals, the worst being a tumble down the rocks on one of the steeper ascents where my knee hit the rocks and brought me to a momentary pause to check no broken bones. The final climbs on all fours were tough and then being met with the waist deep water explained why people appeared to be so clean on their return to transition!! Energy returned for the final  run home and a sense of elation at having returned without any broken bones………in fact elation at having returned at all!!! On reflection far tougher than expected but would return for another bash when the memory has faded!! Sally Burgess: As I took over to do the third leg from Jaqs, she uttered 3 words “that was brutal”. On reaching the first summit, the path thins out as you run above the quarry with big drops to the side, here I was almost blown off my feet, combined with hail storms, it got a little scary! Relief followed when the path opened out. The rest of the course had me falling in bogs, slipping on my backside and giving me a laugh each time I went down (& an expletive).  Would I do it again? I think I would. Sophie Whittaker:  Well that’s my first senior fell run completed!! Seriously the toughest race I’ve competed in, I could barely stay upright due to the strong winds and bogs around the 10k course. Even at one point I fell straight into a pond/boggy mess & got stuck waist height, so thank you to the fellow runner who had to pull me out!! Oh & not to forget falling down a steep hill onto stones and rocks…ouch!! This is definitely one for the 2016 diary!