Rich and Tom, a tandem and a 24 hour race

We get our inspiration from a tough little lad here at Team JMC….

Just after Tom had finished his first 24 hour race at Strathpuffer this year, he was asking what other 24 hour races he might be able to do. I sent an email to No Fuss Events to see if he could ride at Relentless 24 in October, to which they replied yes, but with the proviso we rode our Alpkit tandem.

We left the Peak District early on Friday morning and drove the 350 miles North to Fort William. We arrived in plenty of time to put up our pit tent in daylight, get our race number, chat to some friends, then adjourn to a Travelodge for a comfy nights sleep. 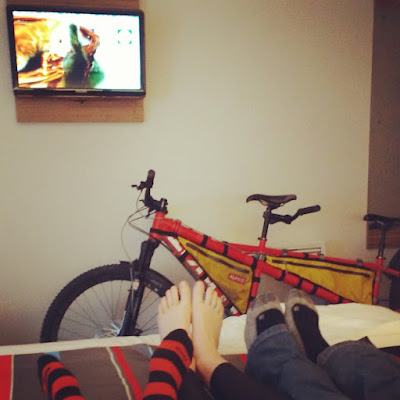 Overnight the weather had changed a little from the unseasonal warm still conditions the night before.

We arrived back at race HQ to find our tent partially collapsed, and some of our stuff soaked through. I was glad we had plenty of time in hand that morning, as it took a while to get the tent pitched solidly again. Thanks must go some of our neighbours who did their best to save the tent at 4am, then some others who gave us some bomber tent stakes which helped make sure it didn’t blow down again.

Tent sorted, we got dressed to ride, were briefed about the race, and lined up for the start, amusingly far nearer the front than we ought to have been as the first bit went straight up a hill.

We didn’t hold people up though on the hill as there was lots of passing space. I was a bit concerned though that the tandem would be a liability on some of the tight turns others had told me about. Oh, but something  was actually scaring me, and that was the raised wooden boardwalk (North Shore) sections. If the curves on any of those were too tight then the back of the tandem wouldn’t get round and we would probably get hurt.

I won’t give a turn by turn account, but will say that we rode every bit of the course at least once. We didn’t fall off the North Shore. The uphill sections were hard work on the tandem, the downhill sections an absolute blast.

We did crash a few times into trees and rocks, but didn’t get badly hurt. Though after one particularly spectacular off, there were some tricky bits that we thereafter elected to walk.

The course was hard and there were only a couple of bits that you could relax on with the tandem. We did have a good system though where Tom was in charge of food and drink, so we got to refuel whilst riding as well as back in the pits.

As we were organised for food and had a pair of Exposure Toro lights to keep us going , nearly 12 hours of the 24 had passed before we took a proper break. Tom was a bit tired so we decided that we’d have 3 hours sleep before heading out again.

3:30AM and  we are good to go again, except that Tom doesn’t fancy eating anything. I put this down to tiredness, so we took a bit of extra food in our pockets as we set off up the hill for later.

Our ascent was interspersed by Tom making loud belching noises, and him grumbling about his stomach. At the top of the climb he asked if we could stop for a moment (I thought for a wee). He dismounted the tandem, then emptied his guts over the floor. 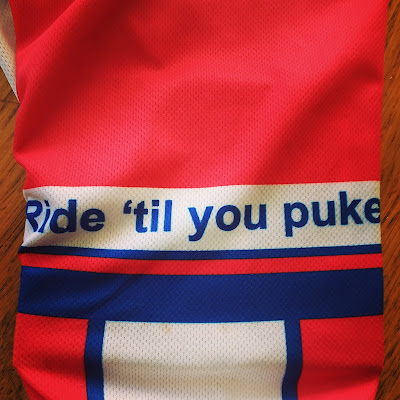 Pictured above is the caption on his Team JMC  race jersey. Apt eh? The thing is we were only about a 1/3rd of the way round the lap, so he would have to ride some more.
I made him sip some water, and he was soon feeling better. We rode back down to the arena (at 2/3rd distance) where he could have retreated, but instead he said we should ride back up and down the hill to finish that lap.
Tom still wasn’t liking the idea of food though, so I decided we’d have a few more hours off, then maybe ride a last lap in the morning to finish.

9am, and the extra rest had done him good. He ate ham and cheese toasted wraps and a bowl of cereal for breakfast accompanied by hot chocolate.

He even stopped for a bite to eat on the way round. 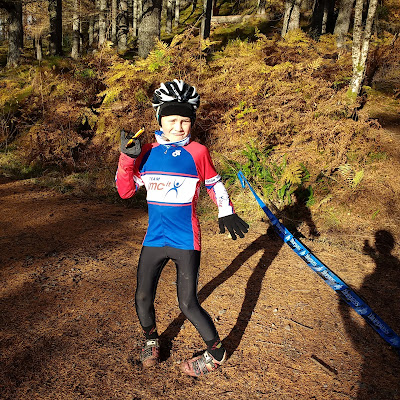 We finished our last lap nearly bang on 24 hours after we started to make a total of 11. 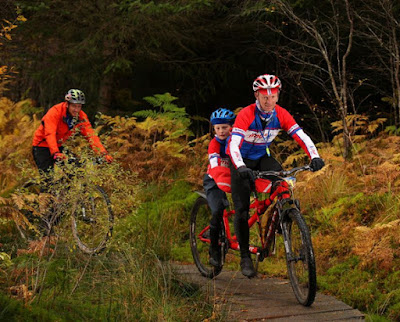 One of the best things about these events is the opportunity to catch up with so many friends in one weekend. Great to see you all.

Many thanks to all the competitors who we didn’t know and their supporters for cheering us on.

A big thanks to the race organisers for letting Tom take part.and of course to our sponsors.

Last of all thanks to my wife and daughter for being our pit crew!