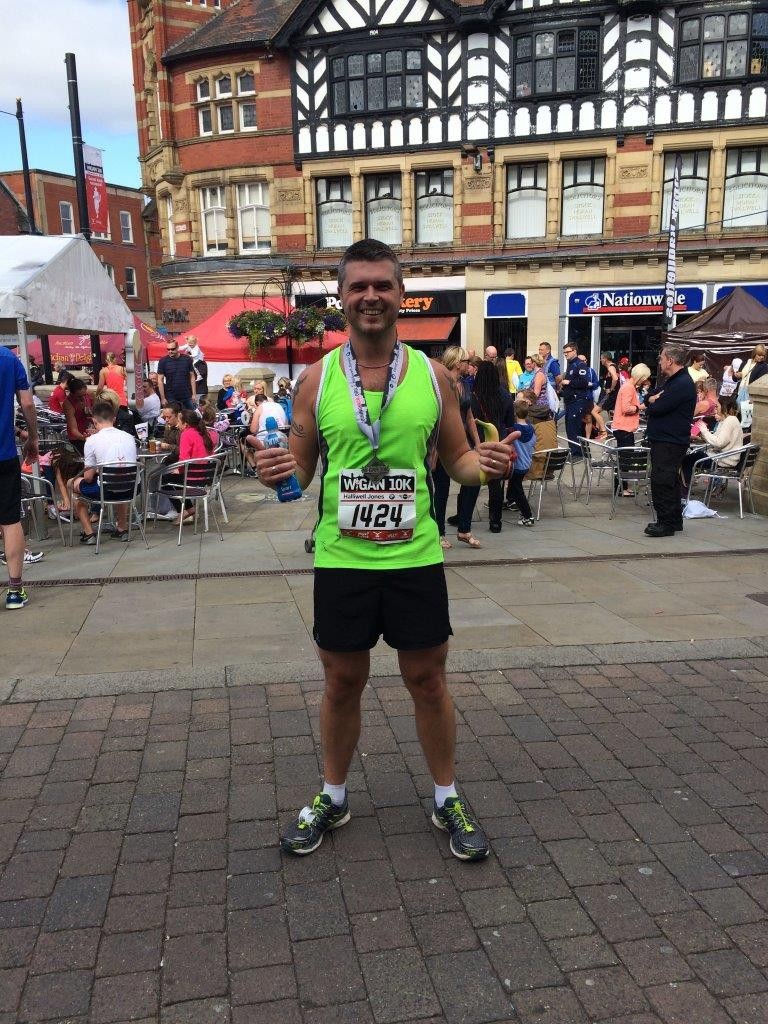 Martin runs, rides a bike and ventures outside Wigan.

This year I have reduced the number of “official” events. Rather than doing several of the same distance, I’ve swapped around and even got on the push iron to earn some medals. I had two major events during September and October, so here are a few words on each. 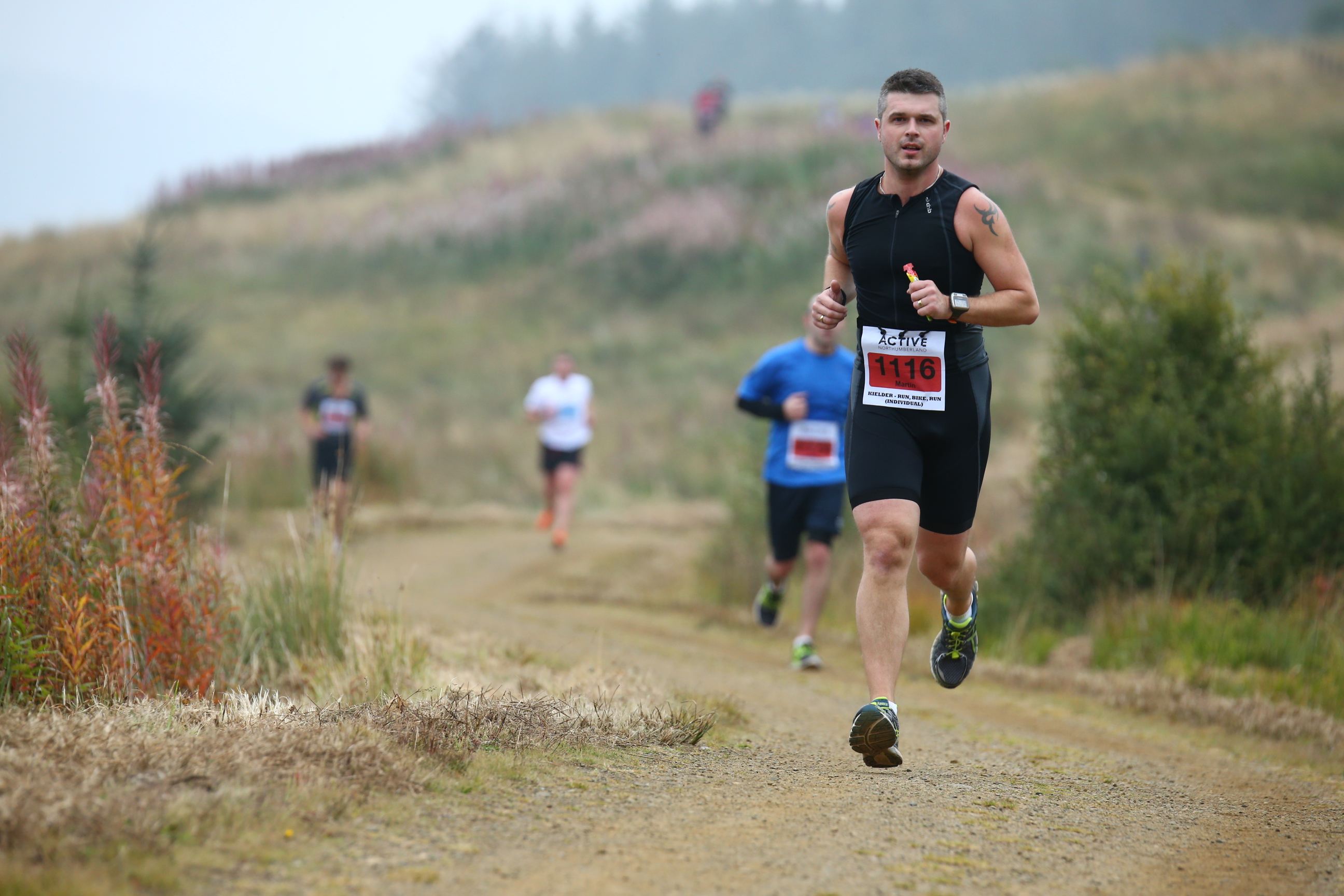 First up this autumn was the world famous Wigan 10k. This was the third year of the event and it just keeps getting bigger. The weather, as always was tropical. The blazing sun was keeping everyone in good spirits. The support for this race is really impressive. The whole town is filled with people, bands, a massive stage, food markets, pop up bars and all the pie shops are open as well! The course is a flat, fast route which cruses out from the centre of the town, out to the DW stadium (I helped fit the kitchens there) and back into town. The last section of the routes snakes and winds deceptively through the enigmatic Mesnes Park and back into the centre of town where the party never stops.

I clocked a 45 minuet time for 10k and 46 for the course. I mapped the course just over 10k this year, there was a lot of weaving in and out for the first few miles. I think if I’m going to significantly improve on the next course time, I need to get further to the front of the staring grid. Next year already booked!

The jewel in this year’s crown was defiantly the Kielder Run Bike Run. I’d entered this earlier in the year after hearing various stories from different people about how good it was. So I decided to join the fun.

The weather was perfect. Mild, not hot. Not raining and no wind. No excuses. The event is over a marathon distance on a trail around the full circumference of Kielder water in Northumberland. Viking territory! The route consisted of an 11k run, then 25k on the bike and lastly a 6k run. In old money that approximately; 6.8 mile run, 15.5 on the bike and 3.7 for the final run section. Living where I do, I’m surrounded by hills, so I was well tuned to tackle anything that the route could throw at me.

On the start line, there were a couple of events due to go off at pretty much the same time. The event forms part of the Kielder Marathon weekend. On the Saturday a 10k and the RBR people were due to head off. Sunday played host to the half and full marathon (yes, I was tempted to tackle the half as well. There is always next year….). I met a few familiar faces in the form of Neil Heppenstall and Paul Bowie on the start line. After a few last minute discussions on the route and expected times, we were all keen for the off. The first run section was described in the paper work as “undulating”. Translation; a lot more ups than downs. Not knowing the route very well I wasn’t keen to push myself too hard at first. After the first few miles were chipped away, I got into my stride and upped the pace slightly. The run route took us towards the new Kielder village (the old one being under several meters of water) and took in some awesome views. I came in to T1 just over the 50 minuet mark. A little slower than I wanted if I’m honest. A quick shoe swap and on to the bike. A few of us left T1 at the same time and were given a little comedy moment when a rather angry gentleman screaming “coming through! Move aside” took a wrong turn and ended up in fence, while we casually sniggered up a hillside. I’ll be first to admit, I’m a little green on the bike event front, so I held back to see how I performed on the loose terrain. Turned out pretty well, and I was soon gunning past other riders, thanking them for moving aside. Manner cost nothing n’all.

The cycle route took in steep straight climbs, steep winding descents, sharp bends and switch-backs that never stopped climbing (killers!). I ate every mile on this and loved it! There were very few parts of the course that I felt it safe to take on fluids. I was either trying to not fall off going downhill. Trying not to fall off going uphill, or trying not to fall off ending my race on a tight bend. So it was almost inevitable that the dreaded cramp set in at the last mile. My calf felt like it was being slowly peeled off my bone with spoon. One gentleman screamed as he shot passed “I can see it pal! I can see the cramp! It looks horrid….. Good luck though”. It took around a minuet before I could move my leg again. This meant the last mile was taken rather gingerly.

Out of T2 with the runners back on the feet, hobbling through the transition area and back out for the final run. The first few miles hurt. I mean, pain like I’ve never experienced. After a mile or so it got easier and my calf muscle loosened. I was able to bung loads of liquid in me. The final few hundred meters were through the forest. The legendary midges were obviously showing their full support, as all of the marshals were now in bee keeping attire. On the last bend there had gathered around 15 of the finishers who were screaming like wildlings encouraging me and others through. It was brilliant!

Over the line after a quick high 5 from the smaller of my support crew. Over in 2 hours 41 mineuts. 46th overall! I’ll have that any day of the week! Excellent piece of silverware for the collection along with a goody bag filled with bits and bobs. As per the norm, it was stripped clean of anything that little boys find interesting by the younger crew member before I was aloud it back.

This was, without doubt, the best event I have ever done since I started taking part in such things, way back in my teens. Next year, maybe I’ll try and squeeze a 13.2 miler on the Sunday in as well…….

I had a blast doing both events and they are firmly in the book for next year.