Tom Seipp is 9. For the past few years he’s been doing some big rides on his bike with his dad, Rich. He’s also just completed an amazing 10 laps at the incredibly tough Strathpuffer 24 hour race and we’re proud to have him on the team.

Rich tells us all about his lad’s incredible achievement…

Strathpuffer is billed as one of the hardest mountain bike races in the world. Winter, Scotland, 17 hours of darkness. So what better introduction to the world of endurance mountain biking for a boy who is 9 years old?

I’ve done the race before solo, and to be honest, I had absolutely no intention of taking place in it ever again. It’s a hard race for a grown up. I’d exaggerated how awful it would be, but Tom would not be dissuaded. Every parent gets pestered by their kids, and Tom pestered me to get him a solo entry for Strathpuffer.

We arrived as darkness fell on Friday night. There was snow on the ground, and it was snowing. Tom was disappointed that the snow didn’t make good snowballs, it was too cold. Some hardy souls were camping, not us though we were staying in a nice warm Travel Lodge.

Saturday, we were up early.  There was no time for apprehension though, we had to get everything ready. In fact we only just made the start line in time.

A short run to our bikes, and we were off up the long climb.

The encouragement from the spectators and fellow riders was brilliant. “GO Wee Man”

Our plan was to ride at a steady pace, and not to crash. The sun was out, the course was ace, we were having fun.

Less than 6 hours in, and it was dark. No problems there though, we had our awesome Exposure lights to light our way.

All went well until just after midnight. Then on one of the descents my rear tyre blew off the rim. This coincided with Tom getting a pinch flat. It was dark, it was cold, and it was snowing. No worries though my tools and tubes were easy to access in my Alpkit Possum frame bag. I fixed Tom’s flat quickly. My tyre though, even with the help of Markus who stopped to help would not stay on the rim. So my only option was to walk/run the 1.5 miles back to our pits. Tom waited for me until the last descent, then nipped ahead to get a tyre and tube ready for me.

I put the new tyre and tube on, we were good to go. Debbie who was pitting for us, sensibly enquired as to when we might stop for a rest. One more lap I said.

Two thirds of the way up the climb, Tom wanted a rest, he was tired. When the temperature is sub zero, standing about does not aid recovery. I remembered though some lads who were camped a little further up the hill had said if we needed anything, to call in. We rode on.

The lads from Hawick welcomed us in to their tent. I say tent, but think marquee. Proper settees, and a woodburner that was near 6 feet tall. Tom sat down ate a ham sandwich, and was soon fast asleep. That’s not a dummy on his wrist, it’s his dibber. 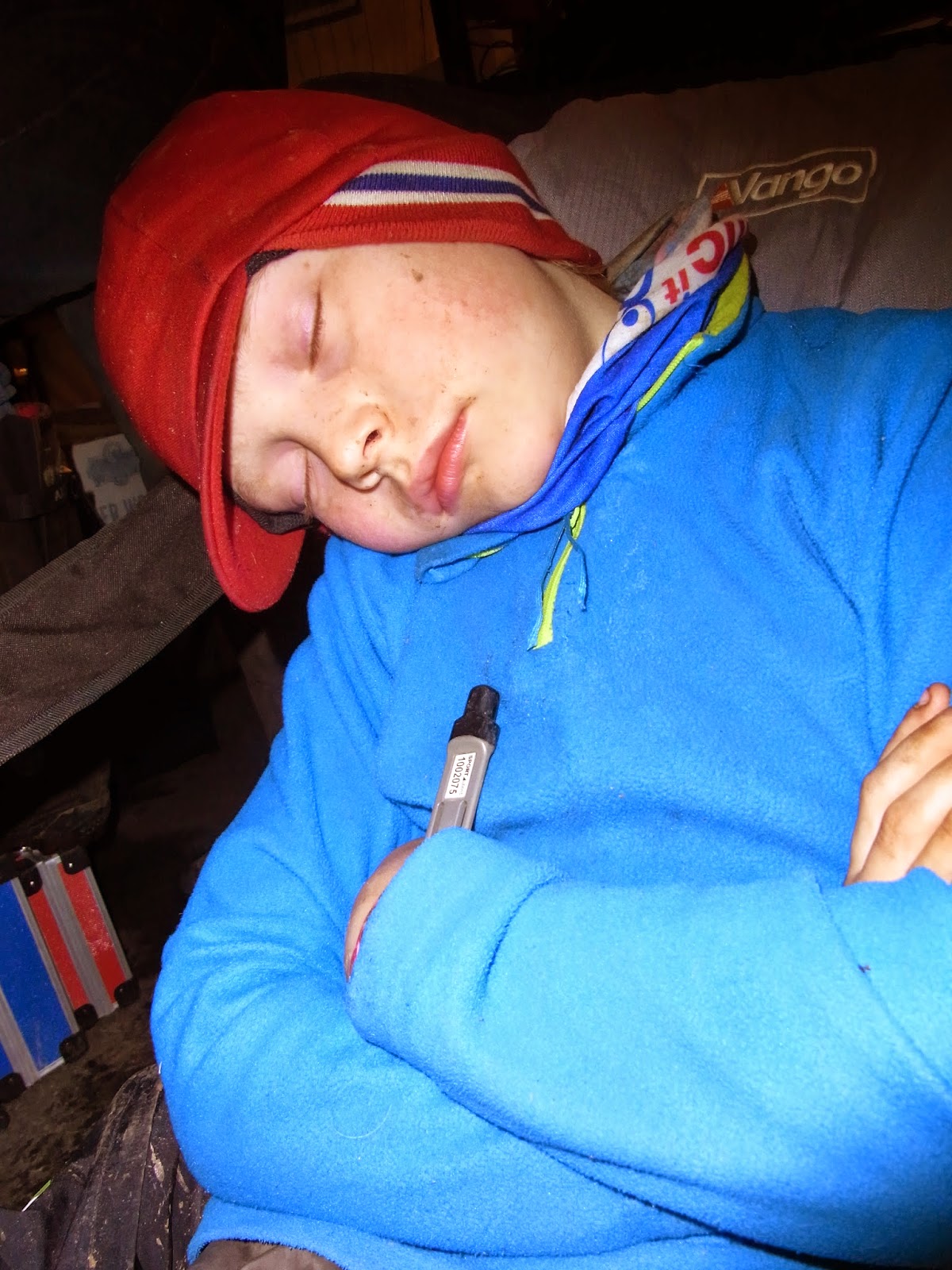 Ideally, we would have stopped there for a while. I knew though if we stayed there too long, that Debbie, and maybe the race organisers would be concerned as to our whereabouts. An hours sleep, a cup of strong coffee, and we were back on our bikes.

We did one more night lap, and then Tom had a few hours sleep in front of the gas heater in the event HQ marquee.

As dawn was breaking we set off for our last lap. I was faffing and told Tom to head off up the climb. It took me most of the 2.5 miles to catch him up. That sleep had obviously done him good.

We had to stop for a picture with the Strathpuffer celebrity Bill on our way back. 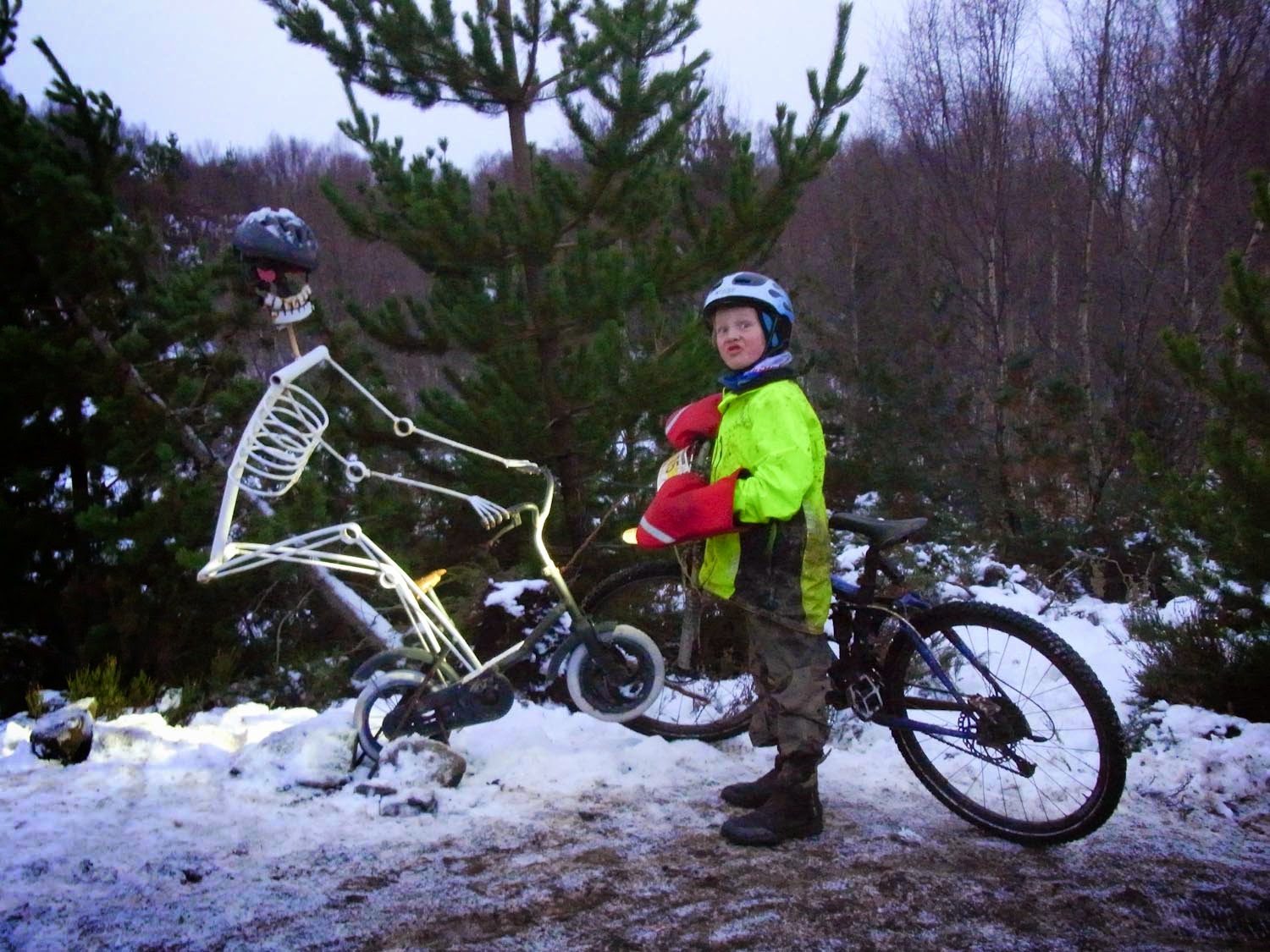 Once back the BBC Adventure Show whisked Tom off for an interview, then it was time for sausage butties and tea.

Tom won the Doug Stewart memorial award for youth performance which is awarded to the best under 19 rider. The applause as he stood on the podium was amazing. I may have had a tear in my eye. 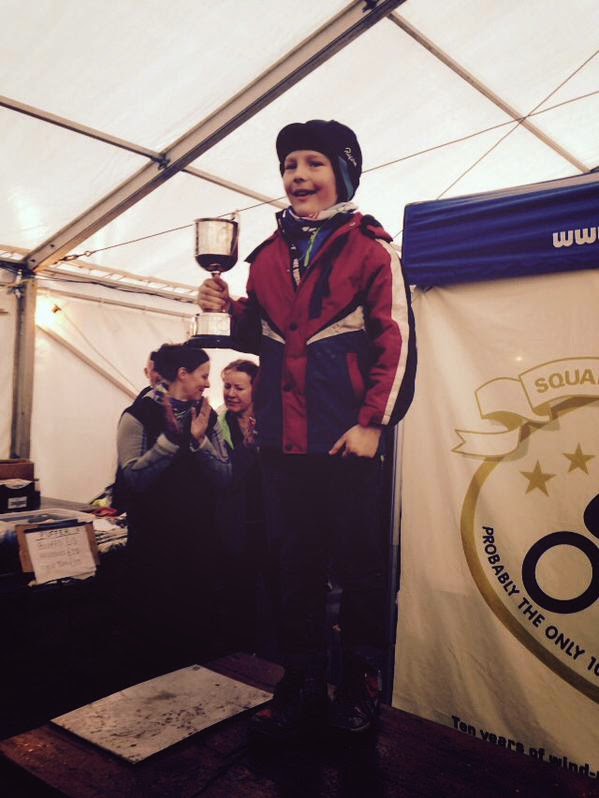 Thanks to Debbie for looking after us in the pits, Team JMC, Exposure Lights and Alpkit for their support. 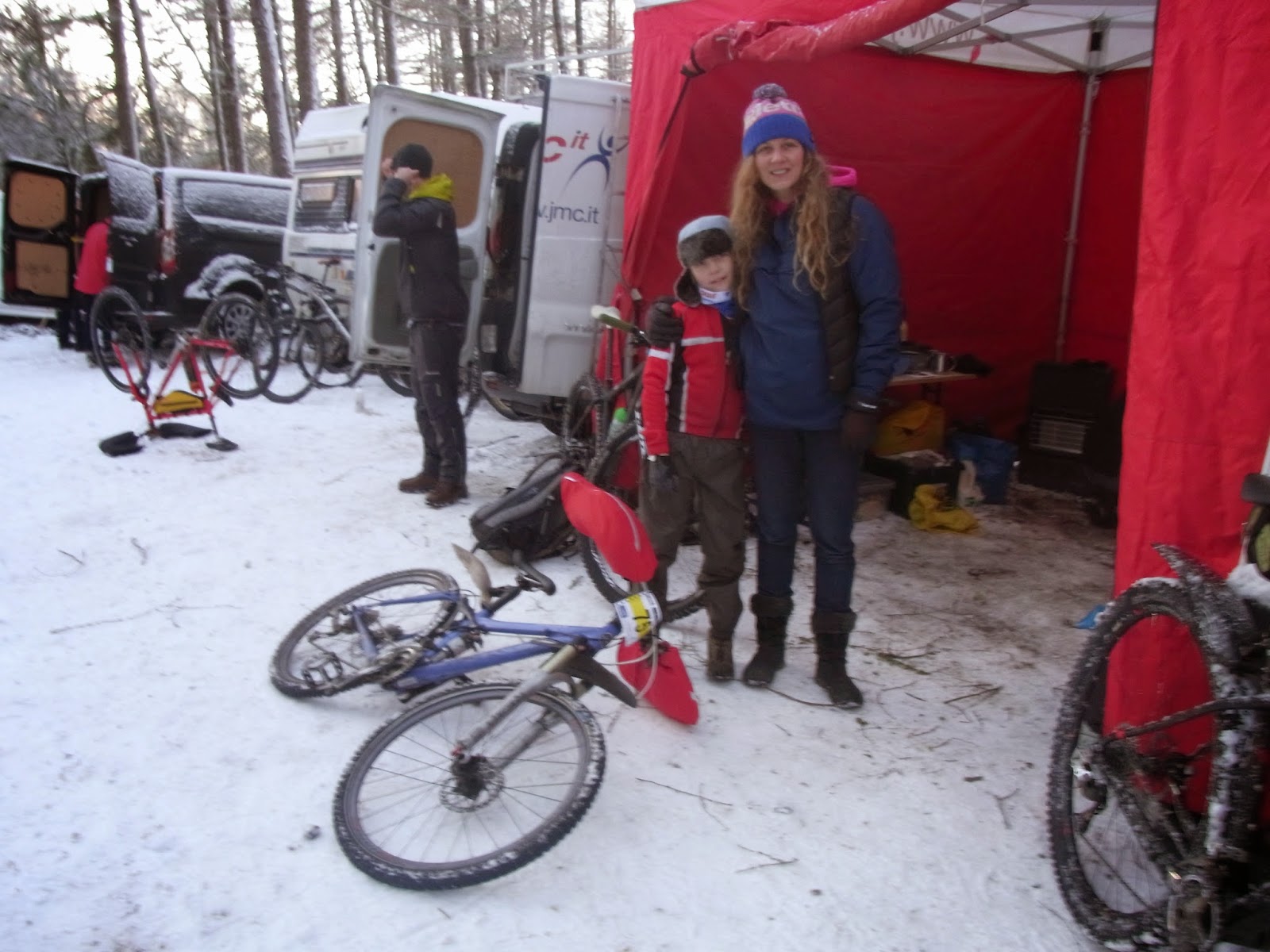 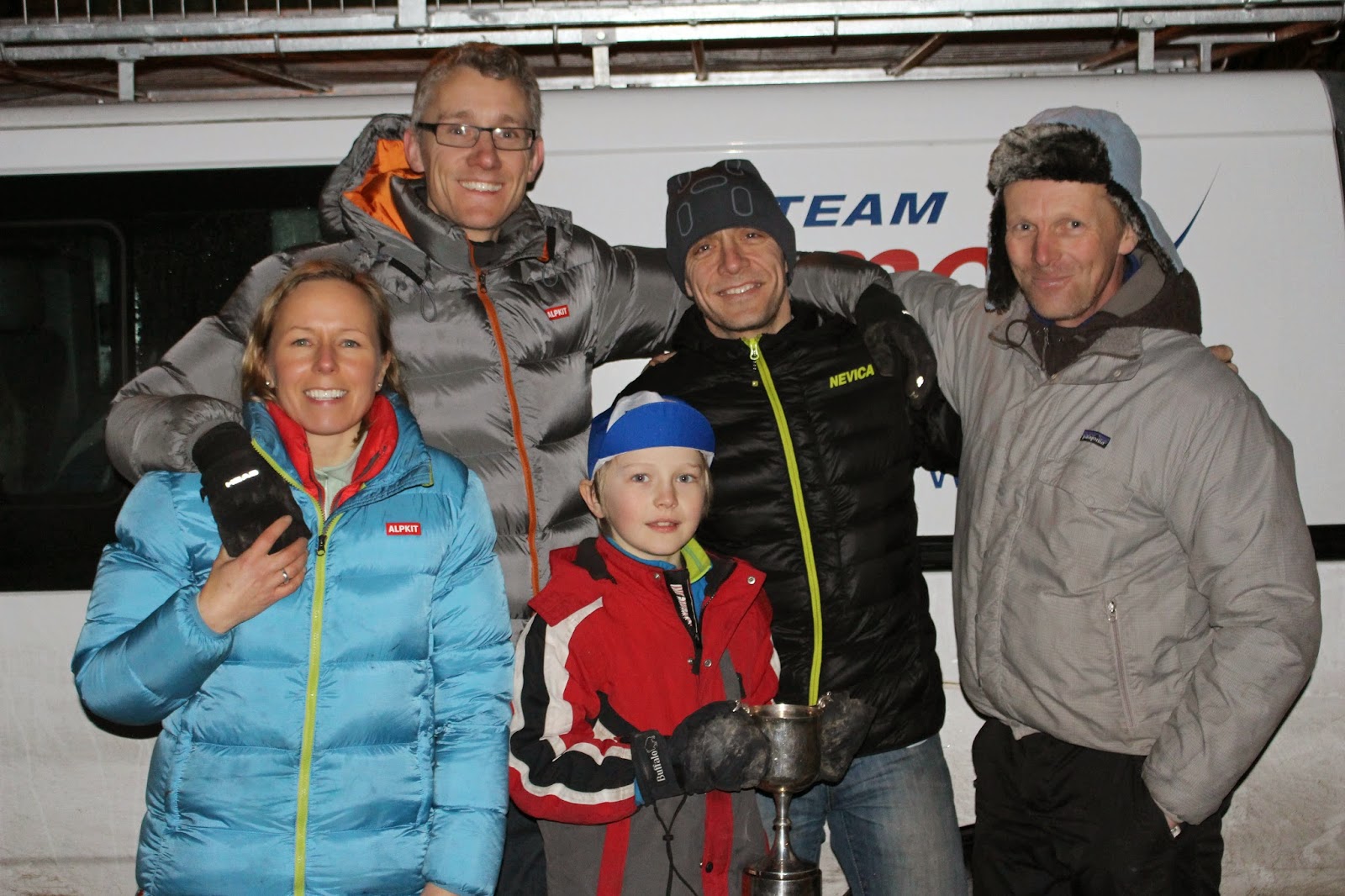 A massive thanks to the organisers of the Strathpuffer race for putting on such an amazing event, and letting my son take part.

See you next year.